skip to main | skip to sidebar

It's been far too long since I've uploaded photos, but today's your lucky day. 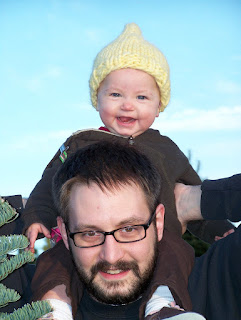 Before getting to the photo-sets, though, things have definitely been changing around the Clark household. A couple days before Christmas Coraline took her first forward crawl. She'd been pushing herself around backward--slowly and awkwardly--for quite a while. We knew she'd get it eventually, but once she did, wow it was a transformation. First day she crawled trying to get at the dog leashes on the floor, and by the next she was all over the place. When we got home from our Christmas travels, she climbed up the step from our family room to kitchen almost immediately (although coming down remains an issue.)

Every day she can reach something she hasn't before. We have done plenty of child-proofing, but continue to work as she points out for us "Hey, I can get into that!"

The dogs are rather nonplussed by this little mobile thing getting in their faces, sitting on their beds, swimming in their water and, yes, stealing their food. They have their own gated off area, but it's not perfectly sealed and Cora does her best to breach the barrier.

She's also started to get interested in feeding herself. She'll get grumpy about taking macaroni off a spoon from us, but will gladly pick it up in her grubby little hands. Makes rather a mess of which we'll need to get some photos soon.

We've had some of the cough/cold/sniffles running around, which has made sleep an issue. Since Amber's been sick too, that has made for some miserable nights all around. We do seem to be on the downhill side of that, though *crosses fingers*

So, on to the pictures!

That's all for now. Try to keep the next update from taking so long.
Posted by Jason R. Clark at 11:28 PM